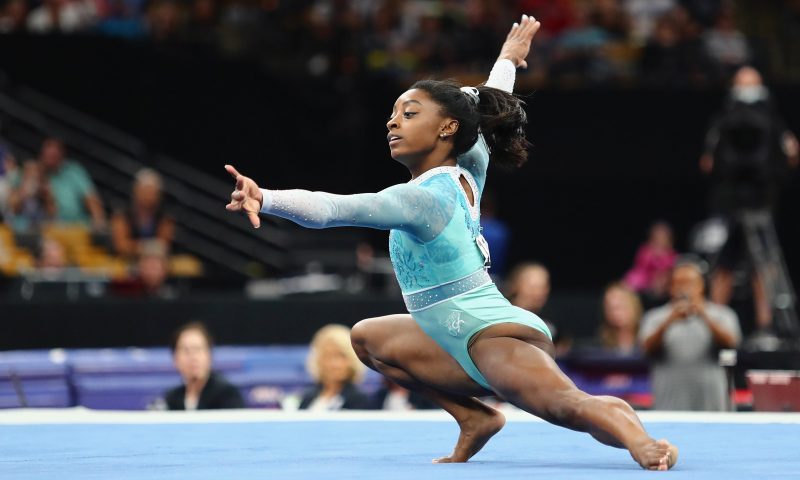 At the Gymnastic World Championships, held in Doha, Qatar Oct. 25-Nov. 3, Biles secured her fourth all-around gold medal, along with five more medals and became the first American to medal in all events.

In addition to breaking U.S. records, Biles also now holds more all-around championships at Worlds than any other female gymnast ever.

Biles rose to fame after the 2016 Olympic games in Rio. She flipped and flew her way to five medals at the game – four of them gold. She tied with fellow American swimmer Katie Ledecky as the most decorated woman at the summer games.

By now Biles is used to doing things no one else has done before. In 2015, her gymnastic skills were already known worldwide. She became America’s most decorated female gymnast by winning 14 medals and 10 World Championships after only competing on the international level three times.

She became America’s shining star when, at only 19, she easily crushed the competition at the 2016 Olympics and lead the U.S. women to a team gold. She also debuted her now signature double layout half twist with blind landing – a move now deemed “‘the Biles.”

The Biles is so difficult even most male gymnasts do not dare attempt it in competition.

Biles returned to international competition Oct. 25. Despite her stellar record and world-renowned skills, it seemed Biles was not going to be able to continue her gold streak.

After the last Olympics, Biles took two years off from the competition. Many doubted she would return to her level of success. She has also had an emotional year, revealing in January that she was one of former team doctor Larry Nassar’s sexual abuse victims.

Just 24 hours before this year’s World Championships, Biles revealed on social media that she had been rushed to the emergency room and diagnosed with a kidney stone. She was told by doctors that the stone was too large to pass. Because of anti-doping regulations, Biles could not take any medications for her pain.

Biles, however, proved herself a champion when she chose to power through the pain and compete at the World Championships.

It was not Biles’ best. She fell on vault and balance beam and stepped out of bounds on her floor routine. These mistakes were uncharacteristic of Biles, and she took to Twitter to apologize for her performance to fans.

“Didn’t mean to give everyone a heart attack. I apologize. I won’t do that again,” said Biles.

didn’t mean to give everyone a heart attack. I apologize. 🖤 I won’t do that again

The results should not surprise anyone in the gymnastics world. It has long been a running joke that Biles could fall two or three times and still beat everyone else because of her huge margins of victory. She proved them right.

Biles’ success comes from her difficulty scores, higher than any other woman by far. Biles typically nails tricks no one else, including most of the men, will ever try in competition. That means that even when Biles falls off the beam or fumbles her landing off the vault, she will still score higher than any other gymnast.

And she did – winning the all-around by a margin of 1.693 points ahead of Japan’s Mai Murakami. The only time anyone scored a bigger margin of victory was Biles in the 2016 Olympics, with a 2.1 lead.

After the competition, Biles was open about her frustrations.

Biles already showed that will that she was the best in the 2016 Summer Olympics. Last week, she showed the world she is still the best – and that she’s won’t be done with gymnastics anytime soon.

Yes, she made mistakes she never has before in competition. However, her routines were somehow even more difficult than ones fans saw her perform in Rio. Biles also soared to new heights in her uneven bars and vault, winning a medal in these events for the first time. This most likely is thanks to her new coach Laurent Landi who trained Madison Kocian for the Games in Rio

After the 2018 World Championship, one thing is certain – Biles is back. With only two years until the next Summer Olympics, Biles is sure to be a prominent figure for the U.S. team in the future. Even with two years off from training and a kidney stone, she was still the best overall gymnast in the world. With more training and some medical treatment, she can only get better in Tokyo in the 2020 Olympic Games.