The worlds of fashion and sports have been closely related since the early 20th century, when famous tennis player Rene Lacoste founded a fashion company called “La Societe Chemise Lacoste” in 1933, which aimed to create sophisticated clothing that could be worn on and off the tennis courts.

In recent years, fashion and sports have overlapped more than they ever have in the past. Designers such as Christian Louboutin and Giorgio Armani designed team uniforms for the 2016 Olympic Games. Designers Stella McCartney and Alexander Wang have both collaborated with the sports brand Adidas. Famous retired basketball player Michael Jordan continues to make around $60 million a year in Nike royalties from his Jordan shoes, which are worn more often on the streets than on the basketball court. Brands such as Ralph Lauren, which originated as purely a sporting supplier, have reinvented the brand over time to include clothing that is both luxurious and functional.

This interconnectivity can be largely attributed to the recent societal and cultural shift toward casual dressing. People are no longer expected to walk out of the house dressed head-to-toe in multiple layers of clothing. It is somewhat ironic that the increased use of sportswear largely stems from the desire for comfort, but nevertheless this ideology has revolutionized what is considered “streetwear”.

A completely new way of talking about fashion has stemmed from this change, adding phrases like “athleisure,” “model off-duty” and “gym-to-street clothing” to describe sportswear that also functions as a fashion statement. Wearing sneakers instead of heels ensures that walking 13 New York blocks won’t be a miserable experience. Wearing a breathable mesh-like material, a loose-fit cropped shirt and carrying a backpack instead of a purse all ensure a clothing ensemble which is both convenient and comfortable. 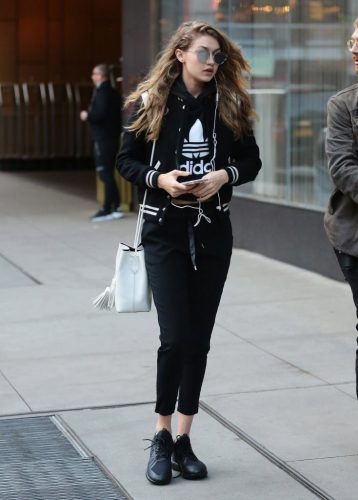 Naomi Campbell in a Versace skirt tracksuit from the spring/summer 2017 collection.

This shift also lead to many pieces, once reserved for sport, to instead become fashion statements. Brands, such as Billabong, have been created purely to cater to individuals that participate in a specific sport (such as surfing) who wish to own sport clothing that is both functional and attractive. Fashion designers have answered this newfound demand as well, filling New York Fashion Week catwalks with sportswear. Donatella Versace opened her SS17 show with a two-piece tracksuit design, which lead a collection that emphasized function and efficiency. Tim Coppens, a Belgian designer, debuted his Under Armour collection in the same week, which showcased minimal tennis shoes and clothing designs that exhibited durability and smooth interaction with the moving body.